Birthdays and Sunburn in Cancun

To sum up Mexico in a few words: lobsters, chip n’ dales, and libations.  Are you intrigued?  I’ll explain and hopefully not terrify you.

We spent 5 nights in Mexico, with each day (and night) bringing something new.  After getting up at the painful hour of 4 AM, we jetted off from Chicago and promptly found the restaurant and margaritas.  We then played the game of ‘Where’s Hugo,’ who was supposedly our travel agent at the resort.  He never showed, hence the play on Where’s Waldo?  You had to be there.  We couldn’t contain the laughter.  But really…I don’t think Hugo actually existed.

What followed was a beach bum day.  I would rather not know how many calories I consumed via pina colada and fish tacos.  The worst (best) part is the delivery to your cabana on the beach.  For the record, I think we held up in the 90 degree humidity: 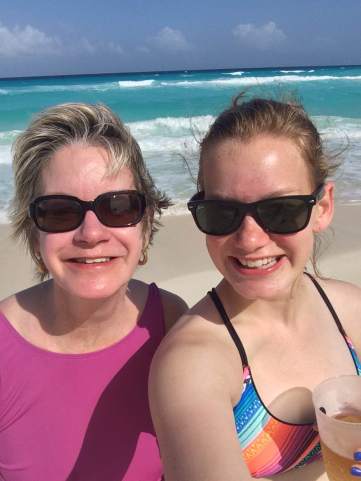 …until the SPF 30 turned us into lobsters.  I’d share a photo of that, but the sunburn naturally hit me in sensitive spots.  What a joy it was to put on any form of clothing.

A few other experiences worth mentioning:

Mexico was truly an experience.  The people were so welcoming and catered to our every need despite our treacherous Spanish.  I would like to bounce around to other cities in Mexico and compare and contrast to Cancun, which is a bona fide vacation destination.

And a little dessert before you go…a photo my mother snapped of me on Isla Mujeres after the humidity and sun took over my head.

For the record, I am now 24.  Somehow this photo ages me in the wrong direction.